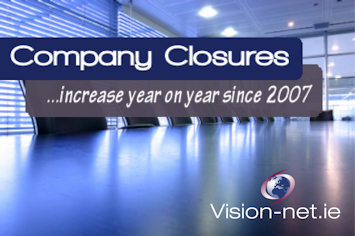 The growth of the Irish economy has slowed to a virtual standstill over the past number of years - a major factor in this, is the year on year increase in company closures we've seen in the last five years.

Figures for January and February of this year show that company closures are up 6% on the same period in 2011.

This continues the trend of a yearly increase in the number of company closures recorded in Ireland since 2007.

These increases have noticeably reduced the rate of expansion of the economy as the below table highlights...

...as you can see, Irish company start-ups were almost 120% more prevalent than closures in 2007. Even when the effects of the recession started to be felt the following year, we saw start-ups 38% ahead of closures.

Last year saw this gap fall to just 1% with only 89 more new companies compared to closures.

In keeping with our previous findings, companies aged between 2 - 6 years old make up 40% of these closures.

Unsurprisingly, the Construction industry has suffered most during this 5 Year period with the industry contracting by 12%. The manufacturing sector has seen a decline of 8%.