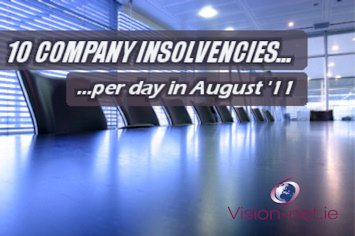 August was the second worst month for company insolvencies in 2011 with 10 Irish Companies closing, per working day, as they were unable to pay debts as they fell due.

Our figures for August this year show that over 200 Irish Companies failed as a result of being insolvent. In total,

205 Companies went out of business.

Further research in to these companies highlighted that 69 of them (34%) had an "unsatisfied mortgage" registered against them. This indicates a loan that the company had previously taken out from a bank and, as of the date of their insolvency, had not repaid.

In this case, the most the banks will expect to receive is partial payment on the mortgage amount that they originally approved.

As we predicted in mid-August, Company Liquidations reached record levels for the year. Liquidators were appointed to 234 Irish Companies. This is the highest monthly total we've seen for liquidator appointments since December 2009.

In order to help avoid being adversely affected by Company Insolvencies why not login to Vision-net.ie and try our Credit Reports. This year they're predicting over 80% of Business Failures 6 months in advance of them taking place. They're the ideal tool to help you avoid Slow Payers and Bad Debts.