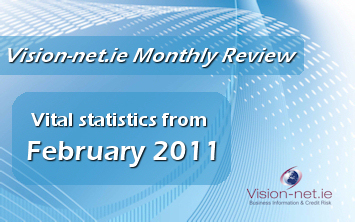 Business Names were the most popular vehichle for Start-Ups with an average of 94 being registered every day this February. 36 new Companies were incorporated each day during the same period. 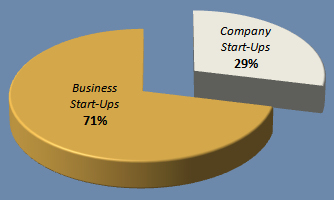 Company Insolvencies On The Rise

178 Irish Companies were liquidated this February. Nine of these were Ordered by the Irish High Court.

The total number of company liquidations for February '11 is in line with the figure we saw last year (179).

This February the High Court appointed Examiners to two Irish companies and an Interim Examiner to a third. The High Court was also petitioned to order the Wind-Up of 16 Irish Companies (an average of four petitions per Week).

The Vision-net.ie Business Barometer evaluates and compiles the latest Official filings with the CRO as well as Published Notices in the National Newspapers to provide you with the FULL PICTURE on Insolvencies, Liquidations and Start-Ups etc for February 2011.