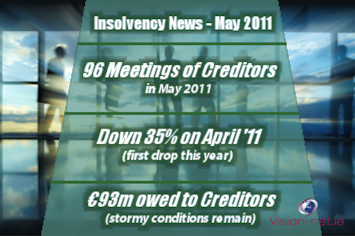 For the first time this year we've seen a drop in the number of Meetings of Creditors taking place in Irish Companies. However, with EUR93m owed to creditors (according to their last filed balance sheet) by these insolvent companies...the news isn't completely bright.

A total of 96 insolvent Irish Companies held a Meeting of Creditors to Appoint a Liquidator in May of this year. This is a drop of 35% on the number of MOCs from April 2011.

However, between them, these 96 Companies owed their Creditors almost €93m. Creditors of companies in the "Wholesale and Retail" sector were worst affected as they were owed just over €40m (43% of the overall total owed). 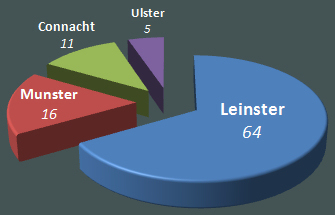 As you can see, the majority of Companies that held a Meeting of Creditors this May have a registered office in Leinster (67%). Between them, firms from Leinster owed their Creditors just over €41m.

The number of companies that have collapsed this year. This figure is down 24% compared to last year
Click here to view the list